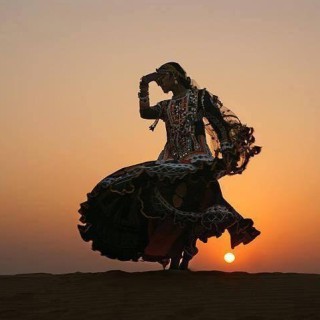 This blog came into being , one chilly morning , on Jan 4, 2014, to be exact, with a desire to put together emotions , thoughts , ideas and feelings that are always in need to be expressed. Eight months and 633 hits later, I am here for a curtain call..with all my lovely folks at  ‘peacockbluetales’ who allowed me to write about them. No particular order has been followed to invite them here.. except for my Muse. So, here we go:

The Muse, the magnificent Peacock who made me a blogger…In gratitude, always..
Princess Yashodhara, the beautiful wife whom Prince Siddhartha abandoned to become Lord Buddha… i hope i could do justice to you.
Shyamli, the dark beauty who came straight out of my heart, your eyes are still silent pools of pain…
Mother, ravaged with age and illness, a universal figure of love.. when she is cared for in her sunset years, life takes a full circle…
Old Potter who is more of a Maker than an ordinary soul…
The gawky , bespectacled teenager who hated to love her father.. [Aside: My alter-ego!]
Little Price Charming, the apple of mother’s eye, who charmed his way into all mothers’ hearts including mine…
The elusive, mysterious, ‘She’ of my Memory Poems who longs to remain as elusive as ever…
One and only…with me forever.. in life and in death… Mountains never looked more beautiful…
The solitary seeker.. for whom search for truth was all..
Krishna and his gopis… the Divine Over soul, loved by all.
The ever smiling Circus Clown…My childhood favorite.. Who can see the ocean of poverty, sickness and misery behind his mask?
Lost-Nut-Squirrel.. she was honest, her fault…lost forever..
The little hope with feathers.. who lives within each one of us…
Last but not least, Baby Kuchikoo and her green lantern… she and her fairy tale made me a child once again…
And, my Home, which has never abandoned me, though i have.. quite a few times.. but each time i came back, it accepted me with grace and love..
We , at ‘peacockbluetales’, wish you all good things in life..Wish we were here for some more time but when the flow of ink dries up what else you can do !
Still we hope to be here once again…May be tomorrow, a week, a month, a year later with another set of stories. .. who knows?..

The morning has just broken and the sky is still deep blue. A sudden thought strikes  me like a bolt out of the blue: Expectation is the root cause of human misery. How often we have seen that our actions have not produced expected/desired results. Things fall smoothly into place like pieces of a jigsaw puzzle.

I feel lighter by years.Peace is slowly returning  but I only hope ( or is it my expectation again!)  it stays with me for a longer period of time.

The day has lengthened. It seems we are in for yet another scorching hot day with no rain in sight. The sky without the water bearing clouds looks so “character-less blue”(!). But one can still hope for clouds and rains!

FROM THE LOST-AND-FOUND DEPARTMENT:

leave their sting behind!

How often we have flipped over
the pages of our foggy memory
and stood before our younger self?
So many journeys into our self in black and white,
So many times!

Ah, this is me, a plain Jane,
with a shock of curly hair,
grinning with a missing tooth!
And, here I am with my cousins
and my brand new carom board,
A gift on my thirteenth birthday!

And this again is me,
in a new pair of glasses
What a feather brained, book worm I was then!
And this one with my dear Amma,
(Such good looks she had!),
She wore sleeveless blouses and read poetry!

And here’s my father, the strict disciplinarian:
“Cross your t’s and dot your i’s
Come home before the last sun rays touch the sky!”
It’s here I stop in silence for a while
and watch my younger self come to life.
I shiver, I dread still, though I am  past my prime.
My younger sister,his favorite, carried tales to him,
(She was always the spoilsport !)
But this was no crime,that i had done
just being honest I thought it then.

He hollered and I saw a storm brewing

“Hold your tears!
I have no patience for all this,
And I hate to  hear this emotional nonsense,
You’ve crossed the line, of discipline
So, no more radio, no more play this entire week.”
(It was adding insult to injury, I feel)
I crumble like a cookie, aghast .
But then if he thought he was right,
Let him be,why dwell in the past?

With this I am jolted back into the present
(Do I still resent it? I think, I do!)
Outside, the sun is a burning ball of fire
And it looks like rains have plans to retire,
(Forgetting us, the sinful ones?)

But, now I can feel the raindrops clinging to my eyes,

And I can hear the rain falling on my wounded soul!

Disclaimer: The narrator has no intention whatsoever to justify or prove a point. All persons and events in this poem are fictitious.

A lovely poem from Stephen Nesbitt’s blog Strangers And Poetry.

Deep within my head,

She wouldn’t go away,

That comes for breakfast

So, here’s the story for you…

One summer afternoon I found a lantern, in one of the smaller rooms of the old house I rarely visited. It must not have been too old as the paint had not faded yet but I never thought of finding it there. It wasn’t mine but then it wasn’t anyone else’s too, though once upon a time  it must have belonged to someone.

But that’s a different story.

So, this lantern was different from any other green and black and blue lanterns that you find  in shops selling cheaper goods . It looked good and dependable. But it had gone through rough weather and the glass had chipped a little. I picked it up. Little did I know that it was a magic lantern. How could I?

On moonless nights, the gold-and-yellow-and -orange flame of the lantern would light up the house.

But then, you know, it had a mind of its own. Sometimes for days together, the wick would refuse to burn until coaxed gently. Then it would let out an angry sputter and a tiny spiral of grey smoke  but at other times, it burned happily. And then what magic it wove!

Rivers, rain, grass, flower, trees, mountains, sun, sky, stars , moon…all came alive on the wall where the light and shade of the lantern met. The wall became a huge white canvas on which a tiny black bird with red throat flitted past, a lonely cuckoo sang , a fluffy tailed squirrel looked around for a lost nut,  green forests , blue lagoons and backwaters… all  came alive… even the rainbow with a sun overlooking the blue cloud appeared in bright colors ( like the crayon colored drawings you make!)  a wild mountain stream …

Baby Kuchikoo! Have you seen a lighthouse? One that guides the ship from crashing at night? Sometimes this magic lantern was like a tiny lighthouse…Now , sweetheart, don’t ask me how and why! There shouldn’t be too many questions when you are listening to a fairy tale!

So, this is how things were!

The magic lantern is still here… It still weaves magic, but perhaps things are  mellower now.. Birds still chirp but cuckoos hardly sing so there are no more songs, sometimes peacocks dance and cry when silence whispers like wind,  but then the lantern still takes me to far off lands!

And I can see it safely placed on the china table near the window .

(Are you still there, Baby Kuchikoo?)

To Maria who is Here and Nowhere..

When I lost you, Maria
that fateful day
I lost myself too,
till eternity
But then,
to live was to be with Maria,
forever.
So I rose from my ashes ,
ancient yet new,
And you came to life,
to be with me
forever!

A patch of early autumn sun
falls on the stone and boulder wall,
green with moss and tiny ferns,
A lonely mountain bird dives
and glides up in the grey – blue sky.
She sits with a  lost- in- woods look in her eyes,
(Your eyes are touched with gold, honey!  He used to say)
Silence of yester years shivers with hows and whys!

Echoes of past fade in the crunch of autumn leaves,
brown and red,  dry and crisp beneath his feet,
She sees a cloud of shadow settle on his face,
Pain has its own terrible beauty, a tragic grace,
a gentle fire that licks the soul
slowly, steadily, silently,
till you forget how and when you lost yourself,
where on the way?

Their glances meet , searching yet withdrawn
his eyes, grey as raven, hers, all fawn,
He reads all writings in her eyes,
Where speech fails, eyes say it all,
More salt than pepper in his hair now,
(how her heart skips a beat to see,)
and his eyes , a fathom less deep.
Her eyes are silent pools of pain, her hands are bare,
(Where’s her bracelet, that keepsake ? He stares)

Darkness drops in , unannounced,
She wraps her shawl around , he tries to look away,
(When he thought he had so much to say?)
Soul less  journeys run a flashback show,
For all we know, silent wars are fought in mind ,
How many breaths does it take to heal a grieving heart?
How many years does it take to mend an aching hurt?
So few years lie ahead, so few breaths left,
Before we step into the valley where the sun never sets,
Past is a city of  pain, we’ve long been there, let’s be fair.

Come home, Shyamali,  it’s never too late to return.
Hold my hand lest fireflies of hope fade away forever.

When you plunged headlong
into the furious river in flood
how could you remain unscathed?
My son! You contemplated suicide of sorts!
The Master shook his head in consternation.

The disciple, battered with battling with elements,
was young and raw and restless,
still growing a fine line of mustache.
His youthful face betrayed a raw solemn energy,
an unquenchable thirst for knowledge,
an urgent quest for truth,
“How else could I come to you then?O Holy Sage!
No boatman was there to ferry me across,
I knew not how to face those furious waves
smothered was I by the river in spate.
I plunged and resurfaced for a breath or two
to search, to discover, and to know
the essence of life!

The Master in deep reflective mood, inquired:
“So this is what brings you here, my son!
All the way from the distant land?
“I have three questions to ask”, said the youth.
What is Life? What is Death?
What causes suffering?Tell me, O Sage! the Truth.
His eyes burnt bright with passion,
and emotions too deep to fathom!

Profound queries, my child, you seek answers to
unresolved questions with no fixed answers,
Sages and seekers of various hues and shades
arrived at their own conclusion,
but who could tell the essence of existence!
How can i enlighten you
when I am a seeker, too!
For years together i have mulled over them,
even rued over them, slept over them,
grown old with them, and will die with them.
The Sage was distraught, as he fought
with himself, with a mind that was seeking
In vain, like a candle half spent , still burning in pain!

Reflections on the Culture of Politics & the Politics of Culture

The Tao Of Wealth

An intersect of Art and Authors

This WordPress.com site is all about poetry etc

Not just a blog, a philosophy

Daily musings on life after 60 & recreating oneself

A Life in Words in a Foreign Language